Sonya is a local bookbinder who does some absolutely stunning work. Not knowing anything about bookbinding I won’t try to describe it other than to say everything she showed me was “really cool” and “virtually flawless”. Sonya was trained under master binders in France and works in both contemporary and classic styles out of her studio in Somerville (or maybe Cambridge… I’ll claim her for Somerville).

After discussing ideas for business cards over the summer, a design was settled on and these cards were printed. Black ink on 160lb Mohawk Antique Vellum Milkweed stock. I’ve printed a few projects on this stock recently with much success, the 160lb weight takes a great impression but isn’t so thick that you need a separate fanny pack to carry your business cards in.

For examples of Sonya’s work check out www.sonyasheats.com.

Here at Fringe, our boys Bryan and Ian are making final preparations for their trip down to Philly this weekend for the bike expo, where they’ll be showcasing their handmade bike frames.

Bryan had me print up a new batch of Royal H business cards in time for the event, featuring a silhouette of one of his custom frames on thick chipboard. An email address on the reverse results in a simple, uncluttered card.

Shout out to Nao for the handcarved lug, repurposed here for a card stand.

So much to write about, so little time. Hope to have a full post about my trip to Maine up this week but in the meantime  you can visit Corduroy and check out the prints from their Editions of Ten show that opened on September 3rd.

My pieces for the show are wood type compositions printed on a special handmade paper… more to come on that as well. 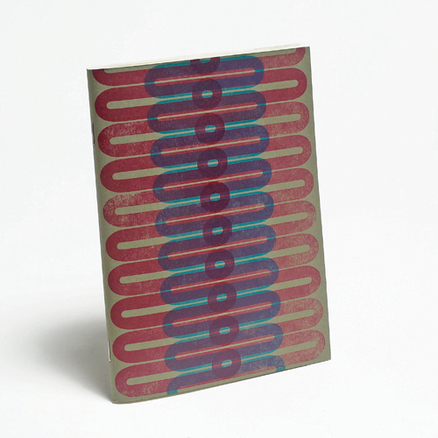 Earlier this Summer, I was asked to participate in the Feedback Loop, a project put together by Mohawk Papers and Felt and Wire. The Feedback Loop enlisted 25 letterpress studios around the country to create a limited run of blank journals using Mohawk paper. The edition of 50 6×9″ books would then be sold in the Felt and Wire online shop, with all proceeds going to the Design Ignites Change youth mentoring programs.

My cover design features a pattern of wood type in blue and magenta over an army green background, with 128 cream colored pages on the interior.

The shop went live last week and contains some great work – I was really impressed by the assortment of binding techniques that were used,especially after using a simple saddle stitch on my books.

All of the notebooks are priced at just $15 – you can purchase my design here, or check out the entire collection in the shop.

Editions of Ten at Corduroy!

Very excited to be back at Corduroy in September alongside a humbling lineup of other folks working in print. I’ll be showing two new wood type compositions (editions of 10) available exclusively through the gallery.

Chris and I will both be up in Portland for the opening on September 3rd, stoked to meet some of the other artists in the show and do some exploring over the weekend. First Friday in Portland is a blast so come on up!

We had some crazy weather in Somerville today leading to flash floods around town – Stebs from Paper Fortress got some footage of the scene around the Repeat Press/Fringe building. Thankfully we’re sitting dry at loading dock height 4ft up from the parking lot.

A collaborative effort between minds at Open Bicycle, Fringe, and Chorus Collective, has resulted in the first release from Union Foundry, the Rotafixer. A full description of the tool can be found on the Union Foundry website but to summarize, this is a universal lockring tool for fixed gear bicycles that uses the leverage of the wheel for more torque than a hand tool could provide.

I’m proud to have been a part of the team on this release, creating the design and construction of the packaging and VIP mailers.

Packaging for the Rotafixer consists of a custom converted vellum envelope, with a die-cut chipboard insert to hold the tool. The front of the envelope is left unprinted to reveal the laser-etched surface of the tool, while the back has an impression in white displaying the Union Foundry logo, tool name, and release edition, printed using the Vandercook SP-20.

For the initial release of the tool, Union Foundry sent out VIP mailers to close friends and influential names in the cycling community. The VIP mailer was sent in a standard 6×9 manila envelope, but the contents were carefully designed and constructed for an elegant presentation upon opening. To ensure the proper presentation, a folded sheet of chipboard was used to pull the contents out of the envelope together. This sheet had rounded corners to mimic the packaging insert, and a heavy impression of the Union Foundry logo printed with transparent base using the 10×15 Heidelberg “windmill” platen press. The use of transparent base can provide a nice alternative to a blind impression as it will give a subtle change to the color and finish of the printed area, and this method was used on the bottom flap of the sheet where the name of the tool was again displayed. 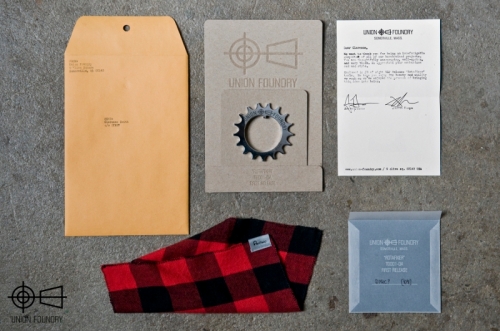 Along with the tool, VIPs received a swatch of Penfield flannel to protect the bike frame during use of the tool, and a typewritten note on custom Union Foundry letterhead. The letterhead was printed in simple black ink on Neenah’s 80lb Classic Crest in Classic Natural White.

Love the classic rivalry and had to make a little something for the finals – wood type on 140lb watercolor paper, edition of 33 (natch). 10×15″, printed on the Vandercook SP-20.

Ten bucks on the etsy site – will ship quick so you have it by the end of the series. 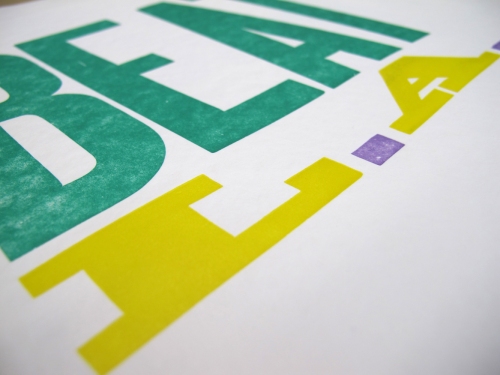 I was approached by the Nave Gallery to create a poster for the concert series accompanying their upcoming art show, “The Beast In Me” – art inspired by the work of Johnny Cash. Jenn from the Nave worked tirelessly to coordinate a 4-city tribute series of bands playing Cash songs, all in benefit for prison literacy progams.

These posters will be available at all four concerts, as well as through the Nave Gallery. A portion of proceeds will go to the same prison book programs affiliated with the concert series.

I’ll be manning the sales table at each show so be sure to stop by and say hello if you’re able to make it out!

I took some pictures as I worked on the poster and put together a process post – unfortunately they’re just off the iphone so quality isn’t amazing but it should give you some idea of what goes on behind the scenes – enjoy!

Started things off with a loose sketch at full size – I had just picked up some linoleum and was eager to put it to use as I hadn’t carved anything by hand in years, so I decided that the main element would be curved text cut from linoleum.

Then started working out the main text onto the linoleum block. You can see in the picture that I almost forgot to lay things out backwards. Total pro. 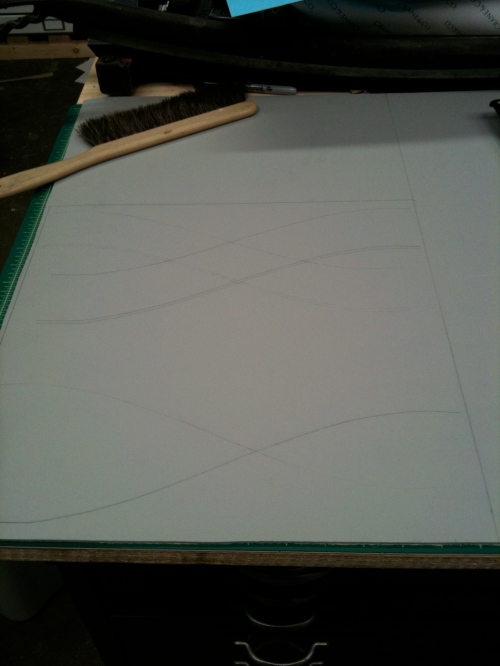 Text drawn out (backwards!) with some wood type for reference:

Starting to carve into the linoleum. I purchase it in large sheets that get cut down and mounted to wood for printing. You can also see an outline of an ornamental shape I was considering drawn out there that I decided not to use in the final design. 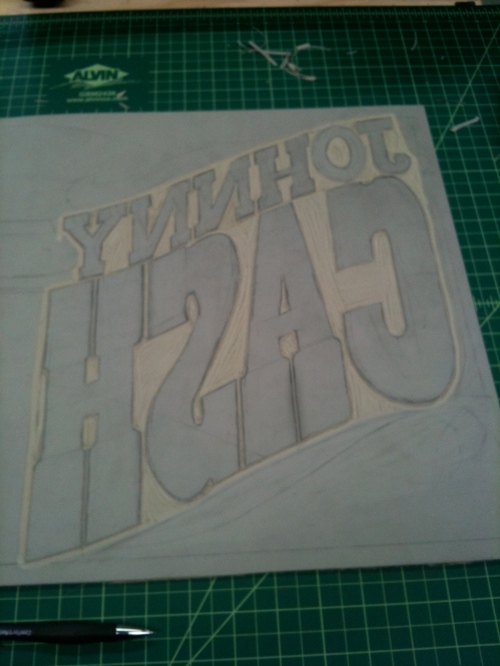 All negative area carved away, trimmed down and ready to mount.

Putting the linoleum aside for a minute, I began work on the background. One of the things that struck me when discussing the concert series with Jenn from the Nave Gallery was the fact that since all of the bands would be playing songs by the same person, there had to be coordination between the bands as to who would be covering which songs. Thankfully there was about 50 years worth of material to choose from. I chose to create the background of the poster from layers of text, spelling out some of Cash’s numerous song titles throughout the years.

This picture shows one layer roughly laid out on one of the oversized galleys that I use for poster layout.

And the second layer:

To print the background, I started with a solid block of linoleum to frame out the piece. Coverage on this layer was fairly light as the addition of the text layers will add up to a nice texture with a good amount of depth.

The first layer of background text in a slightly darker red than the original layer:

I forgot to grab a picture of just the layered text, but it is still quite visible in this picture, which includes the addition of a white star, hand carved from wood during a previous project.

You can probably guess where the color scheme is going – red, white, and…blue ink on the linocut locked up in the bed of the Vandercook SP-20.

Five layers of ink at this point!

For ease of setup I printed the linoleum block and the informational text in two separate passes – here’s the lockup for all the info at the bottom of the poster. 4 venues + over 20 bands = a lot of lead. 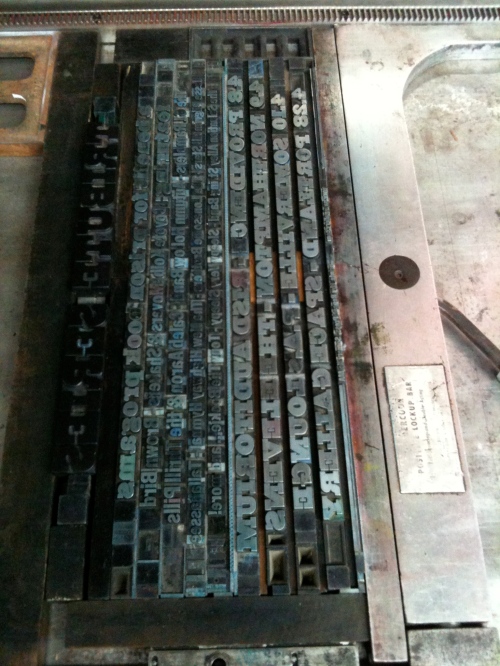 And of course, the final product!